Located about 30 minutes northwest of downtown Phoenix, Peoria was established in 1886 as a humble agricultural community. Since incorporating on June 7, 1954, Peoria has blossomed as a rapidly-growing, modern city that offers a high quality of living in the natural beauty of the Sonoran Desert.

How Peoria Got Its Name

Peoria, Arizona came to be when William J. Murphy, a former Union Army officer, was working as head of construction on the Arizona Canal. Upon the canal’s completion in 1885, Murphy saw the potential for agriculture in the area and returned to Peoria, Illinois where he recruited four families to move out west in November 1886. The official plat map was filed with the County Recorder on March 27, 1897, naming the settlement after their hometown.

Peoria is home to Lake Pleasant Regional Park - a true an oasis in the desert. The 23,000 acre park is home to two marinas and is a popular spot for boating, fishing, water skiing, kayaking, camping, and even scuba diving!

When it comes to entertainment, Peoria is hard to beat! We offer Spring Training baseball, two community theatres, an art museum, and a year-round calendar of festivals and special events. Our P83 Entertainment District offers a wide variety of local restaurants, shopping, and entertainment options for the whole family. 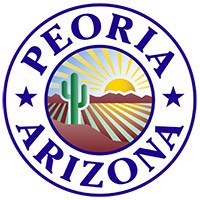