Office of the Mayor

Mon-Thurs 7am to 6pm 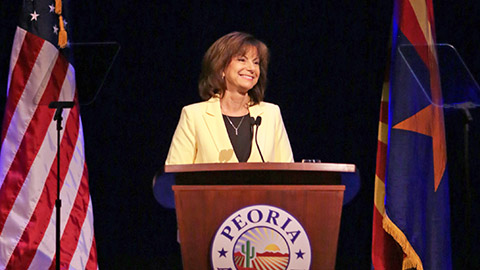 Cathy Carlat took office as Peoria’s first female Mayor in January 2015, and was reelected in 2018 to serve a second four-year term. She has served on Peoria City Council since 2005, where she was elected three times to represent Peoria’s largest and fastest-growing district.

Carlat is committed to cutting-edge public safety, attracting quality employment that embraces the workforce of tomorrow, and leadership to strategically plan for a lasting economy. These factors contribute greatly to Peoria’s exceptional quality of life, to which she remains dedicated as Peoria evolves into a thriving modern city.

Get the inside track on city news and happenings by following the Mayor's Newsroom.

Send your questions, concerns, and comments to the Mayor's office.