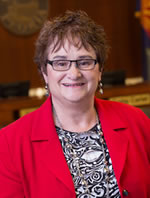 As a native of the West Valley (Glendale), Mayor Pro Tem Hunt served two terms in office beginning in 2004, and was re-elected again in 2014 to again represent the Acacia District. She served 19 months as Peoria’s Vice Mayor.

With her husband, she opened the Old Town Bed and Breakfast in the downtown area of Peoria after her retirement and sold the business several years ago. Since then she has been actively involved in the Peoria Historical Society, Friends of Peoria Public Library, Theater Works, and the Arizona Commission on the Arts. Mayor Pro Tem Hunt is an active supporter of local art, and was strong proponent of Peoria’s first community garden which is located in Old Town Peoria.

Besides her husband Tom, the Mayor Pro Tem's family includes three grown children and four grandchildren, all residing in the West Valley.