While it had earned its spot on the map, Peoria was a very small town, largely undeveloped and lacking essential amenities. Approximately twenty-six families lived in the town site in 1900. Most of the area’s residents—farmers, ranchers, and sheep herders chose to live in the surrounding area, coming into Peoria only for occasional materials and mail. 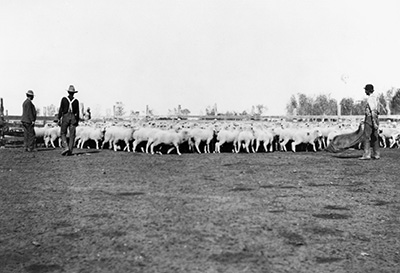 One of the major triggers for change was the completion of Roosevelt Dam in 1910, the product of a federal reclamation project. This newly available, highly dependable water source attracted more settlers, eager to make use of the area’s rich soil and sunny climate. For Peoria, this meant becoming a center point for area farmers who came in from their ranches and farms to buy supplies and to load and ship their goods. As a few entrepreneurial businesses gradually moved into the town site to meet the needs of the community, a town was born.

By 1917 Peoria, though still small, was slowly building into a solid commercial, agricultural, and residential location. Detracting from its growth, however, was its impermanent appearance, manifested in the tin and wood structures that had popped up around town in what was becoming known as the business district. Community leaders like J. A. Hammond and Frank Akin espoused changing the primary building material to brick since it looked better and was relatively more stable. Hammond and Akin believed that for Peoria to be acknowledged as a viable community, it had to have more substantial and attractive buildings.

It was difficult to convince local business owners to invest in a relatively expensive brick building when wood and tin adequately served the owner’s temporary purposes. Hammond and Akin led by example, tearing down their own store buildings and constructing three new buildings that were attached and made of block. By mid-summer 1917, Akin’s two buildings were completed and stocked with hardware, harness, and farm implements for sale. One night in July, as shelving for Hammond’s goods was installed, a fire broke out at the pool hall operated by E. E. Stafford, near Wilhelm’s Garage.

The cause of the fire was never determined, but its effects were immediately apparent. Spreading to Donofrio’s shop, C.A. Robinson’s store, and the three new block buildings constructed by Hammond and Akin, the fire destroyed the entire business district, right down to the Deatsch Brothers Mercantile Store at the end of the row. Firefighters from Glendale and Phoenix responded to the alarm but arrived too late: The damage was so severe it was as though the entire town was wiped out. Peoria was devastated.

Ironically, the fire that destroyed the town’s new brick stores provided the financial incentive other business owners needed to rebuild using more sound building techniques and materials. What could have spelled the end for a small community of approximately three hundred residents instead became the beginning of a new era—sturdier, steadier, and more pleasing to the eye.

As a result of the fire, Peoria formed its own volunteer fire district in 1920. It remained an all-volunteer unit until the mid-1950s.

The town’s first fire engine, a Ford truck equipped with what the local newspaper termed “all the up-to-the-minute fire truck paraphernalia such as sirens, bells, etc.” and painted the characteristic red, arrived from Phoenix on February 22, 1922.

Peoria High School class of 1924
School District Number Eleven was originally an elementary school district. Children going on to high school had to travel to Glendale High School. As the student population of Peoria grew up, the need for education above the eighth grade level became apparent. In 1919 the school board approved construction of Peoria High School.

At the time, many believed the three-story building designed to house the high school was both too large and too expensive for the modest-sized community. When constructed, it was the largest building in town. Planned in the Spanish Mission style, the building featured extravagant architectural elements of Moorish Spain. In addition to three levels of classrooms, the high school boasted a basement and such 1922 luxuries as drinking fountains and indoor washrooms. The auditorium was also used for farmers’ meetings and church meetings.