The desert land upon which Peoria was founded was intrinsically tied to water and its availability. Seeing the possibility in taming the arid desert, settlers labored to construct early canals.

The actual Peoria town site was owned by Joseph B. Greenhut and Deloss S. Brown. In 1890, the two men from Peoria, Illinois, acquired four sections of land from the government through the Desert Lands Act. This 1877 law allowed settlers to claim 640 acres, or one square mile, of land in the public domain in exchange for a small fee and the promise to irrigate within three years. They filed Peoria’s plat map with the Maricopa County recorder on March 24, 1897, naming the settlement after their hometown.

The Peoria water tower was a landmark that announced the town’s presence to all who passed by. For the first few years, before the settlers sank wells on their ranches, domestic water was supplied from “adobe holes” or dipped up from irrigation laterals or ditches and stored in barrels or galvanized tanks. As soon as the proposed Peoria town site was surveyed, however, a hand-dug water well was sunk in 1889 on the public right-of-way at the intersection of Grand Avenue and Washington Street. The “town well” provided water for local residents as well as the traveling public. Five years later the well was refashioned into a water tower and tank. A social gathering place as well as a source of water, the tower seemed to symbolize the young settlement’s growing sense of civic pride. 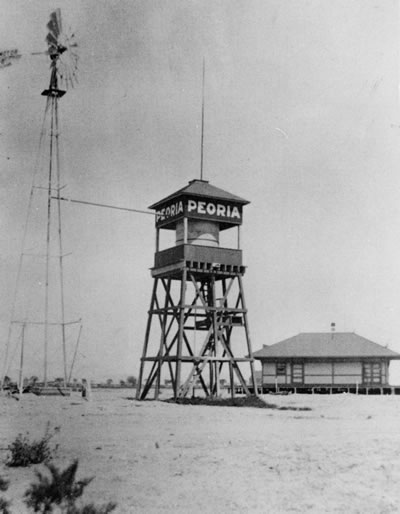 Peoria’s first store opened in early summer 1889 but did not last long. Two brothers named McLaughlin stocked their groceries in a newly built brick building with three arched doorways facing north on Washington Street, saving their customers the arduous trip to Phoenix for supplies. While unsuccessful—the business folded within two months—the McLaughlin store paved the way for one of Peoria’s most needed and successful ventures: School District Number Eleven.

Maricopa County supervisors defined the boundaries for School District Eleven, comprising forty-nine square miles, and appointed Valley resident Florence Kay to teach the first term, starting in September. Miss Kay set up her classroom in the brick store building where the school would remain until Peoria’s first school building, a one-room structure of frame construction, was completed in 1891.

As agricultural activity around Peoria increased, another pivotal event took place that encouraged continued development. William J. Murphy, whose Arizona Improvement Company had been instrumental in creating Grand Avenue in 1887, used his influence to get a spur line of the Santa Fe, Prescott, and Phoenix Railroad to pass through Peoria. Providing the railroad a right-of-way along Grand Avenue ensured a route beneficial to the community he helped create. The line included new railroad stations at Phoenix, Alhambra, Hesperla, Glendale, and Marinette.

Construction on the line, which began in 1891 and concluded four years later in March 1895, connected Phoenix to Prescott and to the east-west transcontinental line of the Atchison, Topeka, and Santa Fe Railroad’s main line in Ashfork. To take full advantage of this transportation windfall, Peoria persuaded the railway company to build a small depot on 83rd Avenue just off Grand Avenue. This became a scheduled stop for the train, which provided a needed boost to the immature Peoria economy. Railroad access enabled area ranchers and farmers to ship their cattle and crops from the town site, as well as bringing valuable building materials like wood and tin to the settlers. Train service all but replaced the old stagecoach line from Phoenix to Wickenburg for the delivery of mail and express, which now arrived directly over the Atchison, Topeka, and Santa Fe, regularly on time.

The depot served the agricultural and ranching interests in Peoria and areas west of Phoenix until 1972. Two years later the Atchison, Topeka, and Santa Fe Railroad sold the building to the city of Scottsdale for its McCormick-Stillman Railroad Park, where it resides today.

Constructed at the turn of the century, the First Presbyterian Church building was the only church in Peoria for nearly two decades. Today the building is the oldest continuously used church in Arizona and remains in use by the congregation and is on the State Historical Registry.