In 1917, a large fire in the Peoria Business District burned down one of the most prominent Peoria businesses – Wilhelm Garage and Blacksmith shop - and virtually wiped out the center of town. In an effort to prevent future fires, a group of local business leaders began efforts to organize a fire protection district.  Three years later, in 1920, the Peoria Fire Protection District was established. At that time, the fire district was made up of the area within Stone Street to the north and Monroe Street to the south, between 82nd and 85th Avenues.

The district initially used borrowed equipment, but in February 1922 the district purchased its first fire pumper, a 1922 Ford Model T. In 1930, the District traded in the Ford for a 1929 Chevrolet chemical fire engine. This historic vehicle is still owned by the Peoria Fire Department and is currently being refurbished by Wilhelm Automotive, the same Wilhelm that burned down and was rebuilt many years ago. 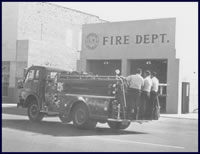 In 1954, the City of Peoria was incorporated. At that time the City boundaries covered one square mile. The Fire District was abandoned, and the Peoria Volunteer Fire Department was established. These volunteers served the community until 1980, when the City hired its first full-time firefighters.

Today, the City is more than 175 square miles and employs more than 100 full-time professional firefighters.